Opposing views are welcome, here at notanotherdemocrat.com.  If someone submits their opinion and allows that opinion to be posted on our website, we will reply with enthusiasm. What you're about to read is a side by side rebuttal to the comments made by Richard Bliecher, here.

The "answer" on Quora, that inspired Mr. Bleicher, to comment with the referenced reply, was our answer to the question: How will Trump supporters deal with Trump losing the 2020 elections if that happens?

Mr. Bleicher's reply was something to the effect of "This didn't age well..." To whit, we replied: "Honesty upvote. Thanks for weighing in. I left it up, because I am fully convinced that if I wait long enough, the pendulum will swing the other way."

Mr. Bleicher then replied, respectfully, "Hey… while I have your attention, I thought I’d ask you a couple questions. I’m genuinely curious and not looking for an argument. Your original post here was more than two years ago, prior to the 2020 election. Has your opinion of Trump changed at all since then? Do you believe the election was stolen? Do you approve of his actions and behavior since then? Are you hoping he’ll be president again?"

Then I replied, "Has my opinion of Donald Trump changed since 2019? Not at all. Having lived in the great State of New York from 1995 to 2015, I’ve met my share of people from Queens, Brooklyn, the Bronx, Manhattan, and Staten Island; Donald Trump was not a surprise then, and he still isn’t a surprise now. In fact, I have greater respect for him, now, then I did back then. Why? Because he is a product of some of the most dog-eat-dog competition based markets in the world. His peers are some of the hardest working, most “in-your-face” take it or get the *F* out kind of people there are. To survive in any business in NYC is a miracle. To actually make money, even if it was just a little, the OLD fashion way, is a testament to the man’s fortitude. In 2015 I was like, “I can’t stand this guy. He’s an *ssh*le! However, during the debates, listening to his practical plain, “I don’t give a *F* what you think.” to the establishment, it was exactly what this country needed. We needed a George Patton. Since then, he has beaten them all. Russia-gate, pee-pee hoax, litigation, betrayal, disloyalty, and the empire of the left. For this, all by itself, my opinion of him increased appreciably.

Do I like everything about the man? Who does? LOL If you’ve been to NYC, can you possibly say that everyone you meet was, “Hey, welcome to the big apple, can I wipe your butt for you?” Anyone expecting George H.W. Bush’es from here on end, failed to understand the mood of the conservative right. I would go as far to say, most of us grew in our admiration for the man - especially in contrast to the clown show that his Joseph R. Biden. (Not argumentative at all.)"

Then we have Mr. Bleicher's "Respectful Opposition" we republished in part, here on this website.

Here is our rebuttal.

Richard Bleicher is a 52 year old sales consultant who claims to have grown up in the NYC area, in the 80s and 90s.  He claimed that anybody who is in their 50's or 40's, from that area, "will tell you that Trump has been a corrupt, grifting, morally bankrupt, malignantly narcissistic, megalomaniacal, spiteful, petty, vindictive, bullying, pathologically lying, Con Man for his entire life for decades before he entered politics".

After reading this comment, I felt sad for Mr. Bleicher. Had he candidly disclosed where he grew up, he would have said, "I'm from Jersey, right across the river, but I knew a lot of people who hung out around some of Trump's properties, and they hated the guy!" That would have been more believable. I am very skeptical of people who have an all encompassing opinion of someone, without ever considering the facts carefully

We spoke with and knew plenty of people who grew up around the "Trump properties." One spoke with us, just, before creating this webpage. Here's a quote from our new friend we will call "Saul", who had no idea why I asked or my politics.

"I grew up near midtown. We all knew who he was. Never met the man. However, we respected him, because he was always respectful of us. I was homeless for 2 years. I hung out around central park. Mr. Trump let us stay in one of the public areas of his building, during the cold, so we could stay warm and we could wash up and use the bathroom. As long as we didn't f*ck anything up and were decent, he didn't mind."

A Sales Consultant, who moved from "blue", New Jersey to Ft. Lauderdale, in "red" Florida, telling us how bad Donald Trump is.

Decades-Old Housing Discrimination Case - LINK - Donald Trump gets sued all the time. If you are a big business in New York State, this is a part of life.

Donald Trump did a lot of "locker room" talk. If he did anything illegal, actually, then we wouldn't even be talking about him, today. - LINK (Howard Stern Interview) LINK (News Story)

Judge finalizes $25 million Trump University settlement. - LINK - It was a failed business. Trump did what he always did. If you want a dime from Donald Trump, you will have to sue him. Civil case about dissatisfied customers. We applaud the Judges decision.

When Trump's Taj Mahal Casino was fined $10 million, the average person would imagine that as a lot of money. However, relatively speaking, it's not when you consider Trump ditched a business that was destined to lose money. He sold the business to Carl Ichon for $50m. Carl went on to lose $350m plus. $10m civil judgment was a "parking ticket" and AML cases for casinos are just as prolific.

To be accurate, the Trump organization was fined $2 million by the State of NY for ignorantly navigating election laws during 2016 election. In the stipulation, Ivanka, Don Jr. and Eric Trump were ordered to take classes and become aware of compliance regulations. No criminal charges were filed.

No excuses, here. Trump did make it his business practice through the years to beat contractors up for costs. He routinely tried to get out of paying money he owed them, frequently claiming "shoddy" work as an excuse to withhold full payment.

Use the UCC to find all the commercial service providers who made claims against the Trump organization. See for yourself how many "victims" there are. We will not defend such practices. - LINK

In a New York Times (yes, the NYT) article, they confirmed that the Trump Organization run by Eric Trump, has raised over $15m for St. Jude's Children's Hospital, over the last 10 years (sic. 2017). I didn't

According to this infamous Washington Post database of "Trump's Lies", one of the quotes is:
"Claims about immigration spiked just before the 2018 midterm elections, as Trump unsuccessfully tried to keep the House of Representatives in GOP hands with exaggerated claims about “caravans” of undocumented immigrants approaching the border." Washington Post

This claim was up front and center stage, in the article about how Donald Trump was lying to the American people on so many things, it was traumatic just to keep count.

By now, it should be apparent to everyone that Trump's claims about the border were not exaggerated at all, but under-estimated. So the FACT yet remains, Trump is known for KEEPING his promises, unlike most politicians who are VERY well known for NOT keeping their promises.

If Donald Trump said anything, it was the job of the left to find a way to call it a lie, then turn it into a story about lies.

As you read from this "database" (if you can find it), you will learn that most of them "can be called a lie", if you buy into the spin they put on what President Trump said. - LINK

Other False or Misleading Claims

By this STANDARD, the paid-Democrats would have you believe that nothing Trump says is true. - LINK

Allegedly, Trump took $1.9 million out of campaign donations prior to the 2020 election and shifted it to his own personal account. Yet there are no criminal referrals, no grand jurys, no arrests. The FBI was on his door step and they weren't even concerned about financial records. Things that make you go, hmmm.

Democrats are incensed that Trump mocked a disabled reporter. The incident was at a live rally where 10's of thousands of people were watching. Millions of people saw the video. Public figure. Trump gives back what he gets. At least the reporter was man enough to take the hit. Fair is fair.

What would you do if your son bragged about how rich he was and used a lewd inference to describe how women throw themselves at wealthy men? I would be very upset and demand he apologize.

If Donald Trump visited my work shop, he would ask me, "Do you work in this 'sh*t hole'?" I would respond with embarrassment and clean it up; send him a picture. He would reply back, "much better".

As you read this story, keep this in mind. The paid-Democrats would have you think Trump is stealing everyone blind; yet where are the criminal charges? - LINK

According to the Office of Economic Co-operation and Development, here is the CLI as it impacts the larger "Inflation Rate" in some of the world's largest markets: 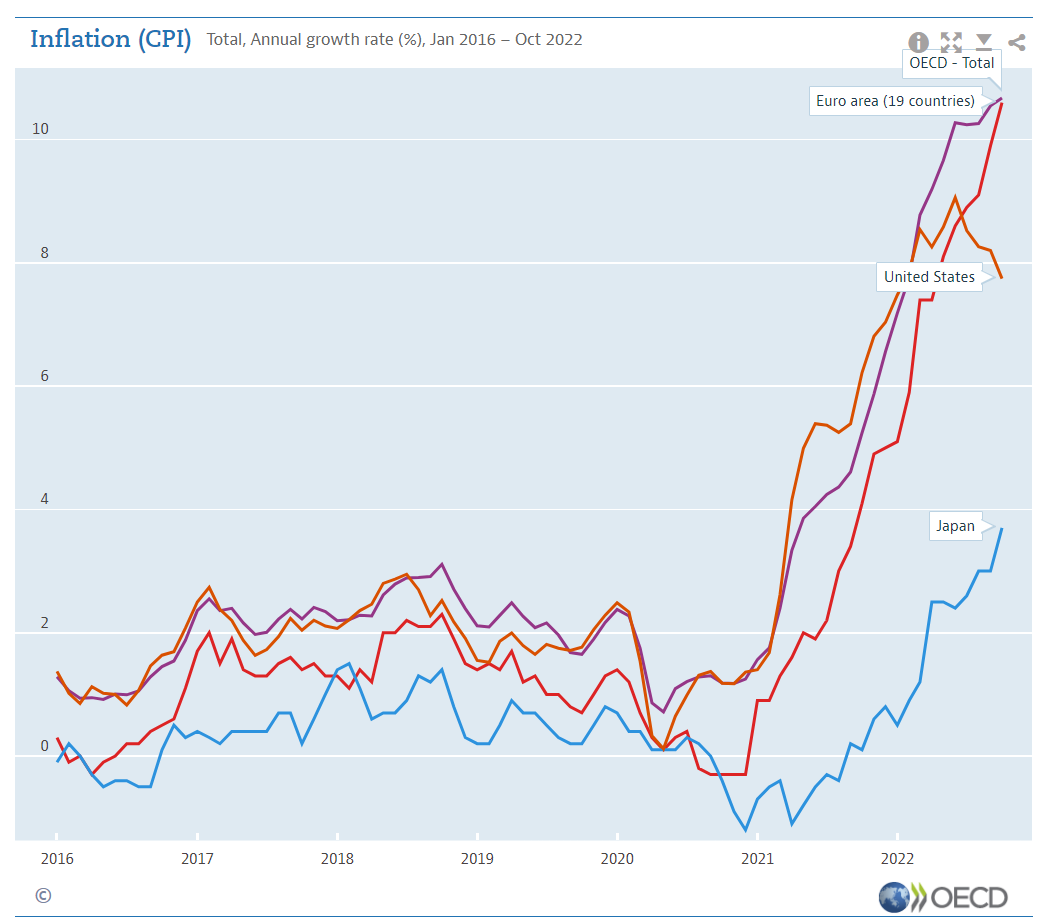 There is no such thing as "composite GDP"! Ask Google. There is such a thing as the "CLI". Predominately used by the OECD as an aggregate business climate predicto.

GDP Growth Under Trump Was NOT the Worst Since Hoover - Check for yourself. - LINK 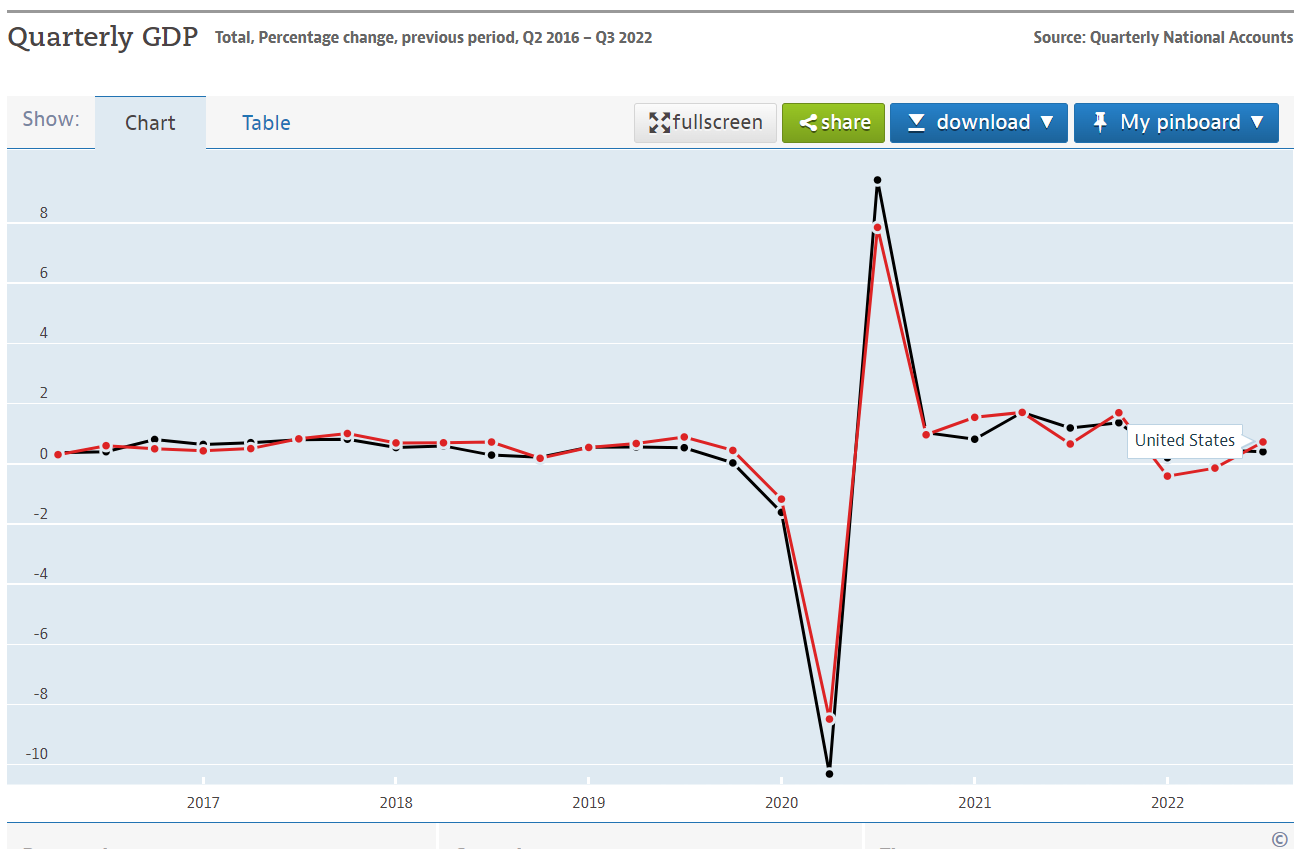 "The new subpoenas related to Mr. Trump’s fund-raising vehicle did not make clear what possible crime or crimes the Justice Department might be investigating. The House select committee investigating the attack on the Capitol and what led to it has also been examining Mr. Trump’s fund-raising operation, and has raised questions about whether it had duped donors through misleading appeals about election fraud." New York Times