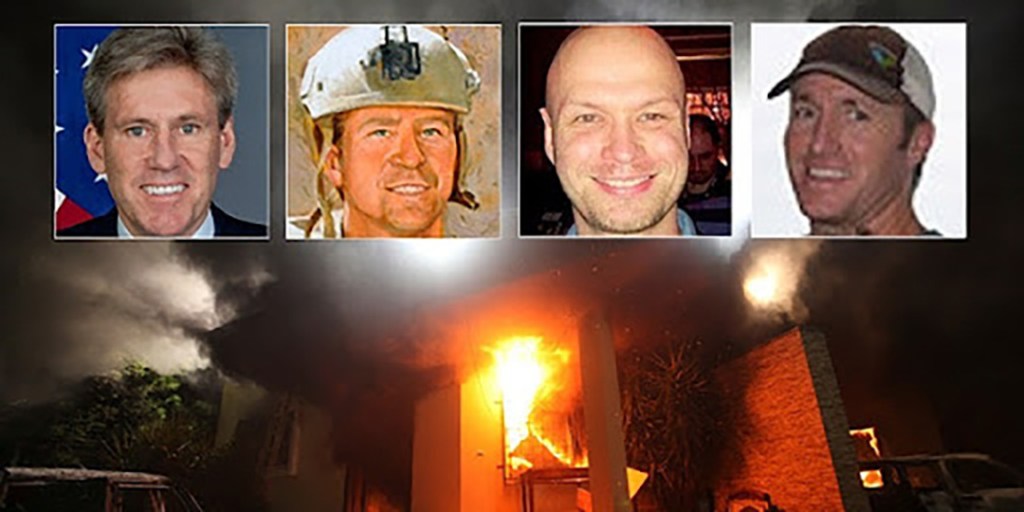 The picture above shows the then-President of the United States, Barach H. Obama and his then-Secretary of State, Hillary R. Clinton at a widely televised funeral of Ambassador Chris Stevens and three other public servants who were murdered by a "spontaneous angry mob of zealots upset over an internet video" on September 11th, 2012.

#NotAnotherDemocrat witnessed the above event and what was said via several media outlets speaking about the attack on our Special Mission Compound and Annex in Benghazi Libia. We witnessed the Democrats, seeking to explain why this grotesque abdication of their responsibility to protect our foreign service officers, the American citizens who support them, and our Host Nation Partners overseas resulted in the deaths of four American Citizens; Ambassador Chris Stevens, Special Operators Sean Smith, Tyrone Woods, and Glen Doherty.

When the news about this tragic event, broke, the official statement from the Democrats in charge of explaining to the American people, what happened to these four brave Americans, was:

An Egyptian crowd who attacked the US embassy in Cairo on Tuesday was protesting against the same film clips that triggered a storming of the US consulate in Benghazi, and then Stevens' death. All were apparently incensed that the crass images, posted on YouTube, insulted the prophet Mohammed.

Credit: The Guardian (1/26/2022 Chris Stevens died at the hands of militants, not an offended mob | Nabila Ramdani | The Guardian)

In her testimony before congress, Secretary Clinton said: "At the same time, however, I was dealing with protests against our facilities that were clearly connected to that video. So we were managing a number of such events."

However, both the President and Secretary of State knew this wasn't the truth. In the election year of 2012, the Democrats didn't want such a public demonstration of incompetence, influencing voters. They needed to get in front of this with considerable vigor. So they manufactured a narrative that this was an incendiary event they couldn't have planned for (a lie they knew was a lie). The loss of life was a risk that came with the job. A risk that was heightened by irresponsible people publishing things that anger Muslims.

Yet, it is part of the official record, that Hillary Clinton herself, e-mailed her daughter at 11:23 PM that she knew it was an attack meant to kill Americans on the anniversary of September 11th, by operatives of a Libyan based Al Queda group of terrorists. If Secretary Clinton knew this, then her boss, President Obama definitely knew this.

Why the lie? Because it was an election year, and the Administration didn't want to appear weak? Maybe. That's may very well be a second layer lie designed to make it seem understandable. However, it is recorded in this same official record by the investigators; Secretary Clinton slowed the Pentagon's response to the attack under the auspice that we can't attack a sovereign country with military assets.

Why would Secretary Clinton want to slow a military rescue effort? Why would Qaddafi loyalists be the only group close enough to rescue many of the Annex and Mission Compound personnel when we just engineered the death of their leader? Why target Ambassador Stevens at a remote compound that supposedly only the State Department knew he was there? Why did the attack abate after the Ambassador was kidnapped and murdered? Why was the U.S. Military incapable of aiding our people, when we clearly had the assets and the firepower to do so?

All these questions the American people needed answers to. Yet all we got was "What difference does it make?" (Sec. Clinton during the Benghazi hearings.) All we got were lies and obfuscation. Democrats gave us lies, misdirection, smoke and mirrors about an attack on American citizens resulting in the death of a US Ambassador and members of his security detail.

The picture of the President of the United States and the Secretary of State for the United States, at the funeral of four dead Americans, using that platform to lie to us and spin the truth to protect their own ambitions, will forever set the stage for the Democratic Party going forward. They sold their souls. They took their constitutional oaths of office and threw them into the trash-bin of political and ideological expediency.

This is JUST ONE example of many, why #NotAnotherDemocrat exists. As a nation, we can't afford one more Democrat in one more public office, anywhere. In order to clear the embedded party operatives who are Federal Employees for life, we must get rid of the political leadership they are in control of. Then protect GOP conservatives from being coopted.

When you vote for anyone other than a Democrat, you are sending a message: "No more lies, crimes and corruption." to the Federal workforce who enables them and the oligarchs who finance them and give them their orders.